Today we’ll have a short presentation of her work with one color and eight black and white illustrations from book Fairy Tales From Many Lands, published by E. P. Dutton & Company in 1911.

First illustration is from Mishosha, The Magician Of The Lake, old tale of American Indians. 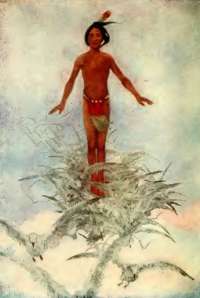 Mishosha, the Magician of the Lake

The gulls carried him swiftly back to Mishosha’s Island…

Next is from the story about two sisters from Hindu folklore.

There were many beautiful dresses among the treasures of the palace…

The Feather of the Zhar Bird

She lifted it in her hands and tasted it…

The Evil One Who Married Three Sisters

Each one was said to be handsomer than the others…

We will visit Japan now!

Overcome with joy at the sight of such a treasure…

Story about Buttercup comes from Norse:

“Then show me how, and I will hold the ax for you!”

O.k., time for some Turkish legends:

The Sun and the Moon

You’ll have to read it to find out what happens next. We are already in England and here is illustration from Cherry:

He was richly dressed and looked like a foreigner…

The last illustration is from France.

Diamonds and Roses and Pearls

She lifted the heavy pitcher for her to drink…

Yep, that’s it. Katharine Pyle loved old tales and she wasn’t afraid of dark versions which were already loosing popularity in the beginning of 20th century. For this reason she came in disagreement with at least one editor.

One thought on “Katharine Pyle”